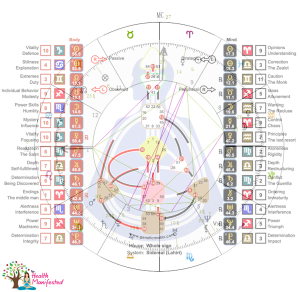 Now that we have the Sidereal Human Design chart, I have been getting question’s like, what is Sidereal Astrology?  Most horoscopes in the United States and Europe use the Tropical astrology system, but in some countries, they swear by a system called, Sidereal.

I would highly recommend playing around with both systems Tropical and Sidereal and seeing which one you resonate most with.  As we are now in the Aquarian age, it is time to experiment and be the scientist and see what you find most accurate.

In Sidereal it is believed that if you were born within 3 days of another sign there is a blending of the energies.  I also find this true with the Gates in Human Design and if you are born at 29 degrees of a sign, you may find that you are a blending of the 2 signs.  I would highly recommend playing around with the Gates especially if you were born on a 6th line or a 1st line.  It is similar to being born on the cusp of a sign, being born on the cusp of 2 Gates.  You may find you resonate a little with both.

Sidereal believes that the stars have slowly moved in relation to the Earth and that has the potential to put planets in different signs, therefore giving you an entirely different chart.

The Zodiac wheel that we most commonly use today is based on 30 degrees in each sign, but there are signs in the zodiac that are smaller and larger.  Virgo takes up 45 degrees.  Cancer takes up around 20 degrees.  Aries is also another sign that is smaller and doesn’t actually take up 30 degrees.  The Sidereal system and calendar was created to help plan for the seasons starting with zero degrees Aries.  A lot of Sidereal systems do not actually use a system based on the seasons.  The Egyptians, Persians, Vedics, and Mayans used the Sidereal system. They thought it was more accurate because it is based on the time of birth and the natural world instead of the seasons on Earth.  Most systems including Vedic Astrologers tend to use calculations that use the 30-degree zodiac signs.  True sidereal uses an uneven set of constellations to reflect the seasons and constellation placements.  This is what people often refer to as true sidereal astrology.

Some sidereal astrologers even include a 13th sign, called Ophiuchus, which is a constellation that was not included in the original 12 signs during the Babylonian simplifying of the zodiac.  The reason they did this is because 13 was harder to create an even calendar because it isn’t evenly divided.

If you would like to play around with Sidereal Astrology charts I would highly recommend looking into Genetic Matrix.  They have Sideareal charts with a long list of different calculations you can use and house systems to play around with as well as Tropical charts for Human Design and Astrology and they even have a Sidereal Human Design calendar as well as a Tropical Human Design Calendar.  You can also learn more about the HD Astro chart seen in the image above, which incorporates the Houses, Signs, and Gates.  A free option for pulling your Sidereal Chart with  Lahiri is CafeAstrology.