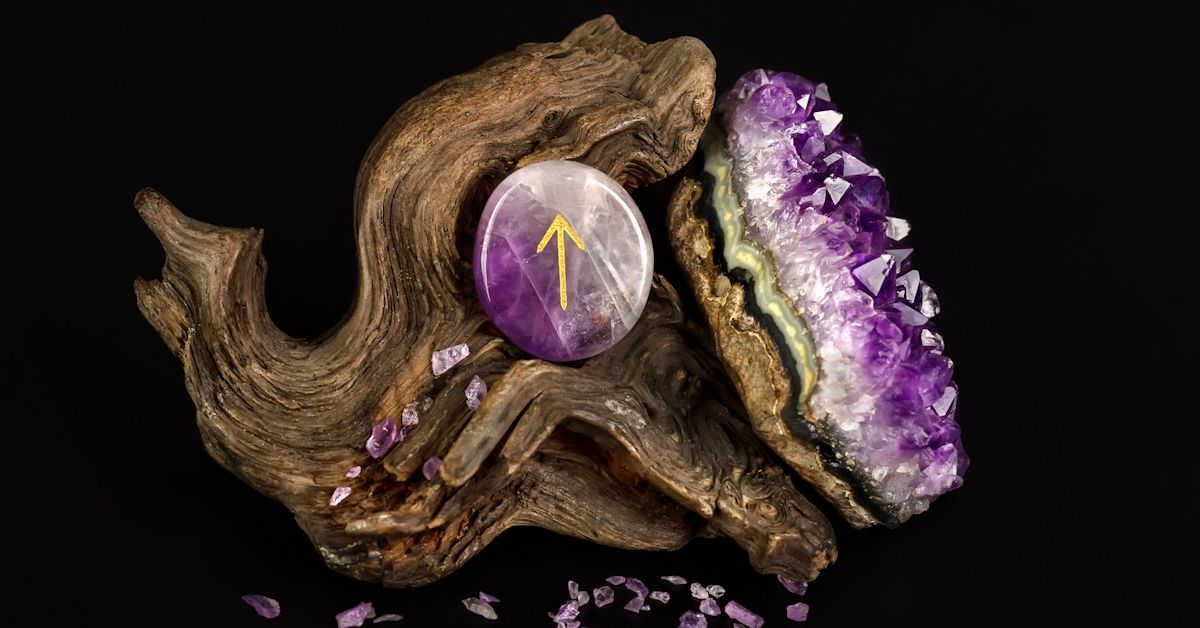 I have written about how we all have a destiny. This fact can scare the wits out of us until we nail down what destiny means for us. I have also written the fact that the runes can help us create our destiny. Now let me shed a little light on three runes, Three Tools of Destiny –  The first rune Fehu, the second rune Uruz, and the third rune Thurisaz to illustrate the point some more. 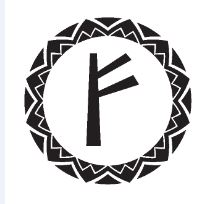 Fehu is the first rune in the Elder Futhark. This Germanic runic alphabet was used throughout much of Northern Europe from the 2nd to 8th centuries. The word “fehu” itself comes from the Proto-Germanic word “faihu,” which means “cattle.” The shape of the rune mimics the horn of the cattle.

Fehu is associated with wealth, abundance, and prosperity. In ancient Norse society, cattle were considered one of the most valuable possessions a person could have. They were used for food, clothing, and other practical needs, but they were also a symbol of status and wealth. Fehu represents the material possessions and resources that we have and the ability to use them wisely. Later it came to mean gold as well

In divination, Fehu can indicate financial gain or the acquisition of material possessions. It can also symbolize success and abundance in other areas of life, such as relationships, careers, and personal growth. However, Fehu also reminds us to use our resources responsibly and to share with others. Feh can have a negative interpretation, indicating greed or the mismanagement of resources. Abundance and prosperity are not just about accumulating material possessions. They are about finding balance and fulfillment in all areas of life.

It is a key quality of Fehu that it must flow. Stagnation and hoarding will be disastrous. There is an old Norse legend about Fafnir. Fafnir was the son of a king who obtained the gold of the Nibelung as a ransom when he held the gods Odin and Loki hostage. Cursed, to begin with, the Nibelung hoard became the downfall of the king.

Fafnir became obsessed with greed and killed his father to get his hands on the gold. Soon thereafter Fafnir shed his human form and became a dragon. He continued to jealously guard the gold until he was slain by Siegfried. But the dragonslayer and many others also fell victim to the cursed hoard. Wealth was not justly spread and became a deadly disease for all who touched it only to cling to it. If you look around, how many Fafnir´s around among us cling to cursed gold and create only suffering from it? You have to look no further than Russia or towards people who claim to make America great.

Fehu is also connected to the element of fire and the energy of transformation. It represents the beginning of new cycles and the potential for change and growth. Fehu encourages us to embrace new opportunities and to be open to change, even if it means letting go of old habits and patterns.

Fire and ice created the first life in the universe according to the Northern legend of creation. When fire and ice mixed Audhumla the all-nourishing cosmic cow and Ymir the first giant was born. Ymir´s body became the fabric from which the nine worlds were built when Odin slew the giant. So one can say Fehu the fire was literally at the beginning of all things.

In terms of personal growth, Fehu can indicate the need to take risks and trust in ourselves and our abilities. It can also suggest the importance of setting goals and working towards them with determination and perseverance.

The patron of Fehu is Freya, the Norse goddess of love and leader of the Valkyria. These warrior maidens carry the souls of the most worthy slain warriors from the battlefield to Valhalla. Freya played a pivotal role in ending the war between two tribes of gods. The Aesir of Asgard (sky deities) battled the Vanir of Vanaheim ( earth deities). Born among the Vanir Freya helped facilitate peace and became the honored golden sorceress of Asgard.

Self-worth is very important to Freya. What worth do you attribute to yourself? What do you deserve? Do you not deserve better? When you answer these questions Fehu does flow and if you are still unsure about your destiny, Freya´s questions might trigger the right answers about that as well

In modern times, Fehu is still used in divination and spiritual practices. It is a powerful symbol of abundance, prosperity, and the potential for change and growth. It does not matter if we seek financial gain, personal growth, or a greater fulfillment in life. Fehu reminds us to embrace new opportunities and to use our resources wisely.

When Fehu appears reversed in a reading it could mean that the force of life is not flowing. Maybe you live with a feeling of lack in your life. Or you are not in putting in the work that needs to be done 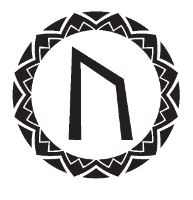 The rune Uruz is the second symbol from the ancient Germanic alphabet known as the Elder Futhark.

The name “Uruz” is derived from the Old Norse word “urr,” which means “aurochs.” The aurochs was a wild ox that was once found throughout Europe, and it was known for its strength and ferocity. As such, the rune Uruz is often associated with strength, stamina, and the ability to endure difficult challenges.

In divination and divinatory practices, the rune Uruz is often interpreted as a symbol of manifestation. The structure gives the raw energy of Fehu its shape and form and physical existence. It can represent physical strength and the ability to overcome obstacles. It also represents the inner strength and determination needed to achieve one’s goals. The rune is also associated with masculinity, fertility, and the cycles of life and death. It is fierceness and courage. For me personally, it has a strong connection to the horns of the moon sickle. It also creates a connection between feminine and masculine spirituality.

Of course, the fact that I´m Taurus born in terms of Western astrology makes me a bit biased about that J Obviously I don´t have a monthly thing going on with the moon in the same way as a woman. But I´m still seventy percent or more water and the tides react to the moon.  So Uruz – again for me personally – is very much the answer to the magic of the moon goddess. It is the representation of what a male can add to the great mystery of life and creation.

I have found different references but for me, Uruz links to the Tarot card of the High Priestess. It hints at mysteries that go deeper than what meets the eye. The aurochs were fierce and dangerous but in their strength, the ox was also centered and a bulwark of stability. If you are that strong and dangerous you have nothing to prove anymore.

In addition, Uruz has a very strong action in renewal and healing. It comes from the enormous resilience and stamina of the aurochs (or the North American bison for that matter). When it comes to healing and recovery, few runes can beat Uruz.

Again, this is a personal experience only but Uruz looks like a gate to me. Its powers of perseverance, healing, and recovery have been my gateway into a better and healthier life.  The Horns of the Moon is a spiritual concept and practice I´m developing. The idea sprang from a powerful shamanic experience with Uruz.

For our ancestors, the hunt for the aurochs was the rite of passage for a young man. Once the young hunter had slain an auroch he was considered fully grown up with all privileges and duties of an adult man. So the gateway makes sense to me.

Overall, the rune Uruz is a complex and multifaceted symbol. It has played a significant role in the spiritual and cultural practices of the Germanic peoples. It represents strength, endurance, and the power of transformation and healing. 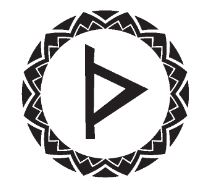 The rune Thurisaz is the third rune of the Elder Futhark. Again, it is a rune with many layers. Its literal meaning is “thorn”. This rune is often associated with conflict, protection, and defense, or the uncontrolled outburst of power. It is definitely a force of ambivalent nature. Thurisaz is capable of blessing us with great good as well as capable of bringing down great harm.

The word “thurisaz” itself is thought to be derived from the Old Norse word “thorn”. Its sharp definitely refers to a sharp, pointed object usable for both defense and attack. Another ancient meaning is “giant” and the giants or jotuns were seen as untamed elemental forces. They were the personification of everything in nature that is not tamed, that does not bow to the human will. They represent everything that is destructive and potentially lethal from avalanches to storms to raging wildfires.

For that reason, the Thurisaz rune was not always seen as a positive force. In some contexts, it was associated with conflict and aggression, and it was used to symbolize the harshness and brutality of war.

On the other hand in the Norse tradition, the Thurisaz rune was often associated with the god Thor. That son of Odin was known for his strength and his ability to protect the Norse people from their enemies. Thor was often depicted as wielding a powerful hammer called Mjolnir, which was said to be able to destroy anything it struck. This association with Thor and Mjolnir further emphasizes the protective and defensive nature of the Thurisaz rune. Essentially Thurisaz is power and authority. Once this power is used to harness previously untamed forces, Thurisaz becomes the protector. Thor is the protector of Midgard, the world of mankind. In many ways, his embodies the principles of Thurisaz. Thor has a darker side too, destructive, and often lacking restraining thought and consideration. Naturally benevolent in nature, Thor can cause great havoc if he loses control of his temper and therefore of his protective power.

When Thurisaz appears reversed in rune readings it can be a warning that we unleash our destructive force. Depending on the context it can also mean, that we are turning our own power against us. We then sabotage ourselves. Or we allow destructive forces to spread inside us like cancer. That can cause all kinds of physical and spiritual illnesses.

Despite its negative connotations, the Thurisaz rune was also seen as a source of strength and resilience. It was believed to give its bearer the ability to withstand adversity and emerge victorious in times of conflict. This aspect of the Thurisaz rune is reflected in its association with Thor. The thunderer was revered as the epitome of strength and courage in the face of danger.

Thurisaz is a powerful talisman that can bring good fortune and protect against harm. Some Norse mystics even claimed that the Thurisaz rune had the ability to ward off evil spirits and protect against magical attacks. A Mjolnir talisman is often used by Northern shamans to create a protective space before they begin their work.

Those who have Thurisaz as one of their birth runes are often characterized by fierce protective instincts and distinct adversity towards any kind of injustice.

Make sure to check more articles from Marco on his blog Fire Stealer’s Torch.

Fire Stealers: the map of how to co-create destiny, no cookie-cutter self-help, guidance to a new life as unique as you are. Live by choice not by default the way that is right for you.

An introduction into the world of the runes, a taste of their power that can already make a difference as you learn, a tailor-made, practical kickstarter for destiny.