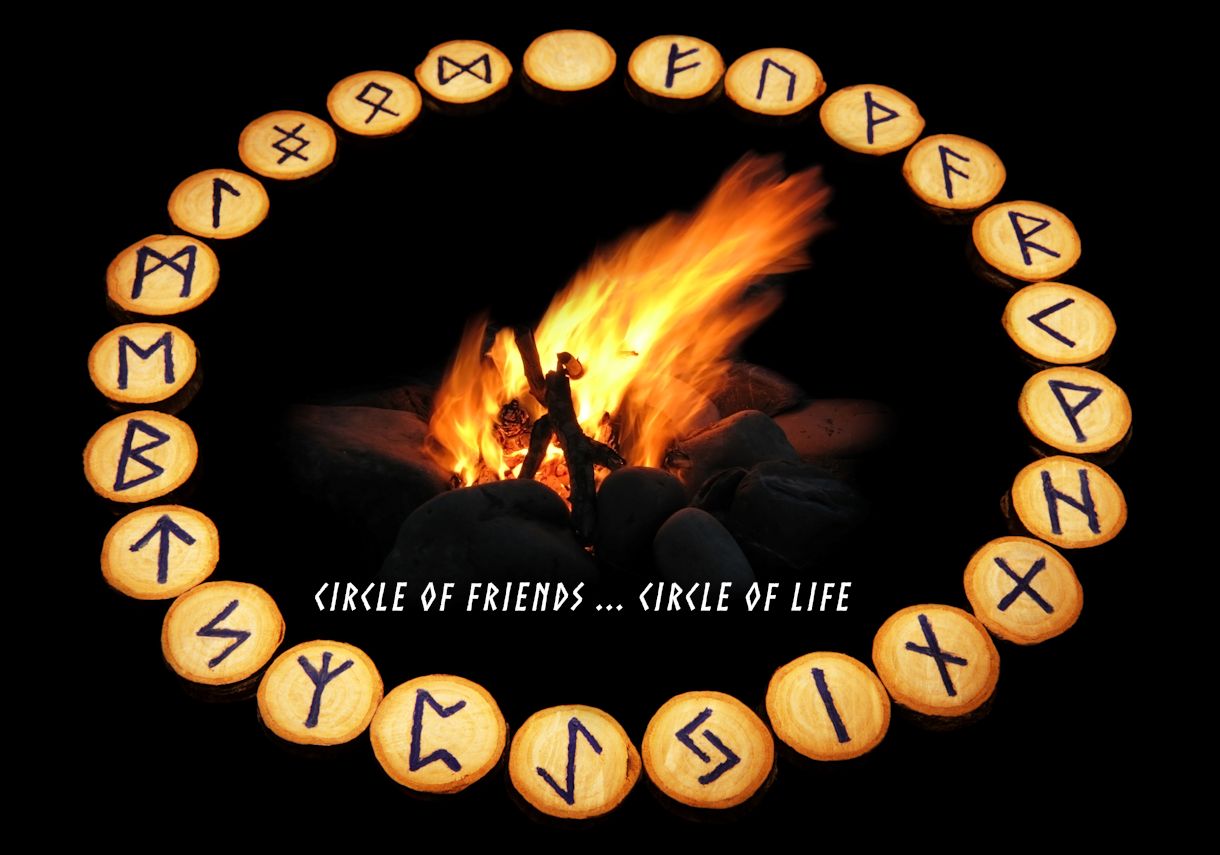 Runes and their meanings

Runes and their meanings are simple when thought of as an alphabet.  Runes are symbols or sigils that form the eldest Germanic ‘alphabet’ known to use. The oldest of those alphabets is the Elder Futhark and ‘Futhark’ which means, for our purposes, alphabet as these are the first six letters of a total of twenty-four (or twenty-five) symbols.

Magic? Are Runes magic? For modern people, the use of Runes seems to be magic.  In 98 AD Tacitus, a Roman Senator believed words held power by how a word was used, the very sound held power.  Is that magic? Rune or rather glyphs, sigils that are called Runes come from Gothic Runa, which if you query the definition, it means mystery.

According to legend, it was the god Odin who discovered the runes after hanging on the world tree for nine days and nine nights and he passed them on to other gods, goddesses, and humans. However they came to be, runes were a source of power.

Runes what are they what is the meaning of Runes? They are a series of sounds and depending on the sound or combination of sounds runes can be a whisper of a mystery they sneak into your life on the velvet paws of a cat and then they go BOOM! The whisper becomes a scream, the mystery reaches down deep inside of you. Because that is how they partner with you.  No academic experiments, little white books, and no scientific hermetic rituals of high magick. Think of it this way- runes act as a guide a force.

The meaning of runes is determined by putting a symbol to a power to a movement.  Then based on how you say it or sing it the rune shares that power.   In modern terms it is not unlike when you gather soldiers on a field, they are unorganized working separately, so we add a cadence a song with a beat and suddenly rank and file are moving as one. Another example would be, to make a statement, We will take that hill! The soldiers respond Hooah!  it is a sound that gives energy and enthusiasm, it means anything but not failure.  The adrenaline grows and chances are mighty good they will take that hill no matter what.

The sound gets into your bones, your blood, and your nervous system. They become a part of you. For the Human Designers: they flood our gates, fill our open centers, and blow-up conditions whether you want to wait seven years for system renewal or not. They are the antidote to conditioning. They are the antidote to everything that is bad for you. And the whisper becomes your lion’s roar or your war cry if you want.

Runes and their meanings are powerful! They are alive. They are a language and an alphabet. Runes are a song loud and strong like a stampede at a soccer game.  Or a soft easy sound to heal mend and encourage.  These Runes overwhelmed me, crushed me, blasted me, kissed me, loved me, and rebuilt me.   They took a broken man and fixed him so he could stand upright and have a purpose.

Combinations of runes were made into songs before there was a book to write them in, handed down through generations lost and found over the centuries. They defy the conventions of modern man.

The rune’s song, if you sing with them, changes you. They possess intelligence and intent. The runes are a form of life I´m sure of that. They are not a wellness program and not for the faint of heart.  They dispense power. Power for you to draw upon to give you strength. Runes get you by the neck, shake you like a rat, and fill you with life itself until you scream with joy and laughter together with them.

Having been a Tarot reader for years, now I say, Tarot is nice, but runes are sexy. Currently, I´m, not reading cards and am working with the runes alone. Why? Because I made a promise to the runes to go all in and trust them fully. As I said, they are not just symbols and sounds. They are alive and sentient in an alien way. They recognize your promises and when you turn your full attention to them, they turn their full attention to you. The runes became my best friends and supporters during a time when I was burned out, numb, lifeless, and empty.  They filled me with life and joy again.

The runes became my lifeline and I don´t know if I would be here writing this without this gift of Odin to mankind.  Now I´m very much alive and this is the fire of FEHU that brought me back. That is the reason I call the blog Fire Stealer´s Torch.

FEHU The Beginning of Power

FEHU is the first rune of the Elder Futhark rune alphabet. It means cattle and wealth or gold. It is the essence and fire of life, the vitality, the self-worth, the will, and the energy to change in my life what needs to be changed. And like all runes, FEHU gets into the nervous system. It gets you moving, changing, and living. Like all runes, FEHU takes you on the roller-coaster ride of life itself because that is its very essence, the real wealth we possess and too often neglect. You can spend this life exploring the runes and still scratch the surface, but it is possible to gain a good working and practical understanding of them with patience and work.  I can help you.

You can create runes for protection, runes for love, runes for health, and runes for wealth to name just a few.  Of course, runes can be used for divination and read like Tarot cards. I found that you can ask YES / No questions and get a satisfactory answer, but you sometimes get a one-liner that little extra you might not expect from a Yes or No question. This depends on the nature of the rune.

However, the runes aren´t talkers in the first place. They are action heroes that kick your tail end into the magic kingdom if you let them. That is why I found them such amazing tools for healing, problem-solving, and personal growth.

When I look back at my own story of an (almost) broken man FEHU has a quality to rebuild you and to teach you how to say, “I deserve better than this” and how to really embody that statement. This is not mindset stuff. It is something you can really believe because you feel it in your nerve endings and the marrow of your bones how the words and their meaning pulsate and vibrate in you.

And then you hear it again…  The whisper…  Its mystery…. As they speak to you…

They connect us to ourselves and to them in a very physical and visceral way. Like Human Design the runes concern themselves with the vehicles, the physical body to really tap into the spirit and make us do things we deemed impossible.

I have read runes and taught others how to cast them. I did spreads for others or let them pick from a bag then interpreted.  Each rune has a set of meanings, some dating back to the time of the Viking raids and the Germanic tribes, some developed in recent times. But there is no fixed meaning. Deceptively simple in form the runes are as complex, multi-layered, and deep in meaning as the Tarot cards maybe more so.  The Runemal, which is the ability to read the runes correctly in each context, is not so much a skill but an intuitive feeling. You learn the runes with your body and Runemal provides the ability to understand.  It develops with practice.

And they are attentive. They learn who you are and adapt to you. You will gain your meanings from the runes within the boundaries set by their individual meanings.

The runes are power.  They are our natural power reclaimed.

Just as manuscripts of old, the runes disappeared and reappeared adding a level each time. The runes are back in action in the modern world, and it was a blessing that I had the chance to discover them. My belief is this time they are back for good.

If you have been to Europe, you have experienced a traffic jam of Epic proportions.  They make no sense it is just stubborn people who refuse to move to yield to another. So, we sit until the police arrive and slowly force the drivers to yield.  It is maddening.  Sitting there one day resigned to my fate I began to sing two runes. That is one way to call them forth to your presence by singing them, they are sounds of power (not unlike a musical cadence) before they became symbols of power.  So in this traffic jam, I sing two specific runes.

One has the quality to be free and unfetter while the other has the quality to move things forward in an orderly way. And while I may have doubted the first time, I used them a dozen times, and every time – I really mean every freaking time – the traffic jam dissolves in about a minute or two at most. It works too often to be a coincidence. I am a believer, and I can teach you to believe.

Make sure to check more articles from Marco on his blog Fire Stealer’s Torch.

Fire Stealers: the map of how to co-create destiny, no cookie-cutter self-help, guidance to a new life as unique as you are. Live by choice not by default the way that is right for you.

An introduction into the world of the runes, a taste of their power that can already make a difference as you learn, a tailor-made, practical kickstarter for destiny.