The Emperor tarot card portrays a father figure.  The rams on his throne represent the astrology sign Aries, spring and new  beginnings. The ankh he holds is an Egyptian symbol that represents life.  The orb he holds represents the world.  The red in the card presents power and passion.  He is wearing a suit of armor indicating safety.  His beard shows he is a wise old man.

Behind his throne looms a tall, impenetrable mountain range, signifying that he is backed by a solid foundation but resistant to making any changes unless he deems it necessary. Beneath the peaks flows a small river, giving some hope that despite his tough exterior, he is still an emotional being – it will just take a lot of digging and trust to open him up to his softer side.

In the Three of Pentacles tarot card you can be a man working on the cathedral. Two people are talking with him about their vision, goals and plans. The Stonemason appears to be discussing what he is able to do. The documents in the hands of the two men is meant to indicate they want to get on the same page.  The discussion they are also having can also indicate the stonemason is an apprentice.  The Three of Pentacles teaches us that when we work as a team we can get more accomplished.  We all have a unique talents and when we all come together our skills can be used to create something bigger than ourselves.  Creating a plan is important and when a plan is in place and you have the right team of people around you or have the skills you need you can accomplish your goals.  The three of pentacles can show that you are on the right path, but having a plan is important.  It asks us to listen to what others have to say and listen to what they are able to offer.

Questions when pulling the Three of Pentacles tarot card: 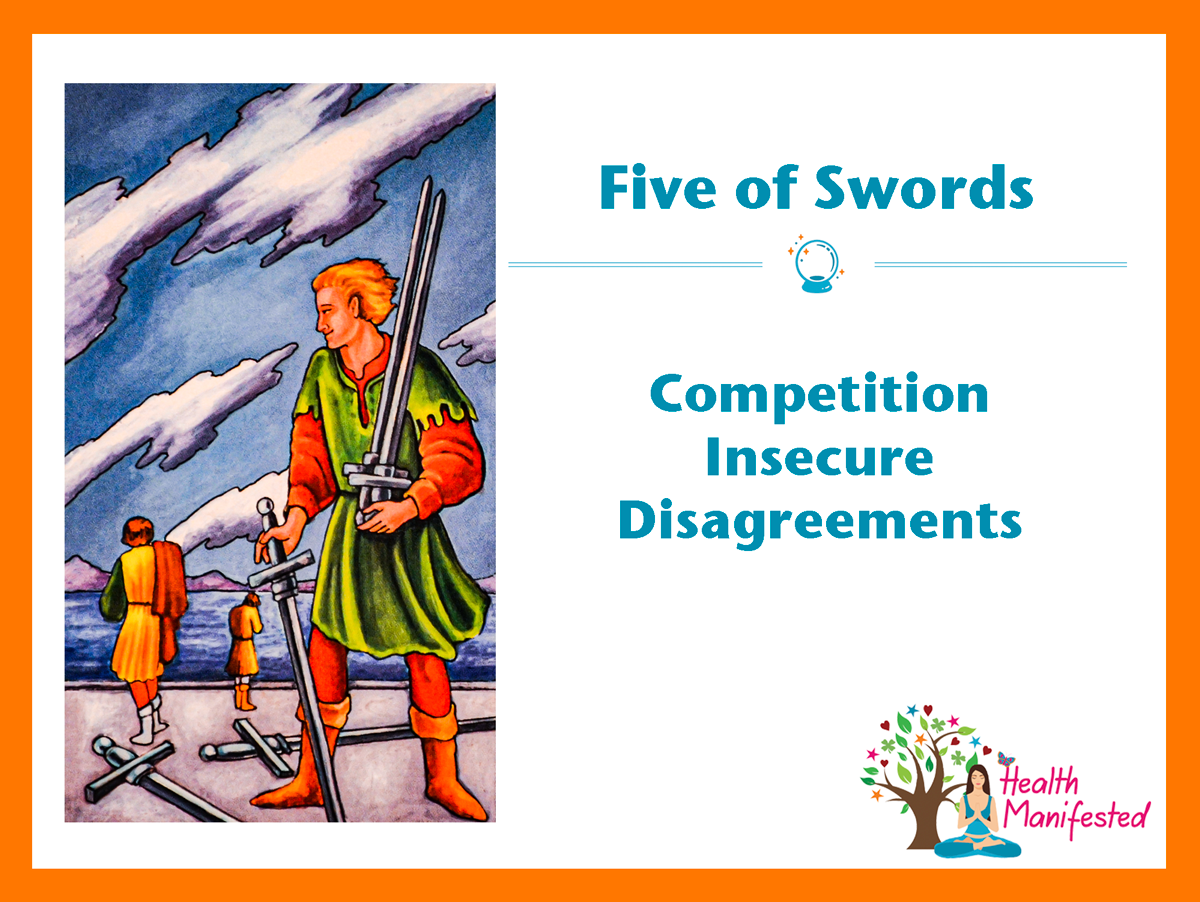 In the Five of Swords tarot card, you can see a man with a grin on his face holding 3 swords with 2 swords on the ground.   Two men are walking away as if they lost a fight.  The gray clouds can be seen as conflict disappearing or conflict in the air.  The Swords can represent the mind, so the battle may also be in your mind.  The man is looking back, which can represent when seeing things from the past they can look different from where you are now.  Hindsight is 20/20.  The man having all the swords can also represent having everything you need to be successful.

Questions to ask when pulling the Five of Swords tarot card: Questions to ask when pulling the Three of Wands tarot card:

In the Ace of Pentacles tarot card you see a hand coming out of the clouds, like in the Ace of Wands, Ace of Cups and Ace of Swords tarot card.  In the hand you see a large Pentacle. It appears that in your hands you have opportunities manifesting abundance.  This often presents itself in the form of a business venture, financial wealth and manifesting your dreams.  It also implies that you are a gift to the world.  You can see a path with an arch covered in greenery and flowers.  It represents if you walk through the archway/opportunity you will find abundance on the other side.  the Ace of Pentacles tarot card is a great card for manifesting your dreams.  The mountains represent talents, which implies you can manifest great mountains of abundance with your talents.

Questions when pulling the Ace of Pentacles tarot card: