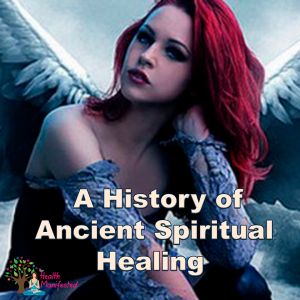 In the beginning, Ancient Healing was composed primarily of Medicine Men, Shamans, Witch Doctors, and the like, many of which have no technical term for their position. There are however many commonalities of their existences.

As a general rule, they were always very revered and sometimes held in awe and superstition by the members of the community. The Healers also tended to be the priests as well as the healers. There was no separation of classes, such as doctors, educators or priests. Whatever the title bestowed, one individual tended to be all of the previously mentioned.

In cases where the personage was benevolent and loving, much of the art of the community originated from this one. Most of the healing techniques were derived from or centered on objects in nature, i.e., animals, crystals, or objects connected with the seasons or weather. As a result, they worked primarily with ritual and prayer with little true understanding of the absolute nature of what they did. In many cases they worked by trial and error, retaining what worked and what did not. They could be called the earliest spiritual investigators. Without this looking into realms beyond the sensed and seen ones, mankind would still be living in the forests, caves and trees.

Some Healers realized the power of control this gave them and used to their own ends. Others were very benevolent and used their power to enrich the lives of the entire community.

Most of the practices were kept secret to preserve this power and as a result most of the “common” people were reduced to living lives of relative ignorance of the teachings of spiritual ideas that accompanied some of these systems.

Many of the Healers were also Seers and Oracles for guidance to the leaders of the communities.

As civilizations became more educated and aware as a whole, so did the Healers, in order to keep ahead of the masses. One of the benefits to this increased knowledge was an increase in the understanding of the powers that were being utilized. As medicine evolved, so did the theology associated with it. The most significant evolution was the Medicine man became to understand and teach the people of “good” as well as “bad” spirits. This began to raise the level of understanding of the masses and bring about much less fear of the spirit realm as well as the Medicine Man. It began to usher in a time of a love and communion with the unseen side. Also realized was a sense of control of ones destiny, allowing the further development of a sense of individuality.

As can be seen Healers have had a great effect on humanity far beyond attempting to create better personal health.

Some of the earliest records of healers occur at very formative times in history and one can wonder at the impact on current times by this.

One of the earliest recorded Healers was what is called a Priest-Physician by the name of Rama. He was a initiate of the wisdom school of the Druids. At that time, men were not usually exposed to the occult knowledge. Women ran all the wisdom schools at the time that had risen from virtual slavery to prominence by the organization of the Druids. As is the way of the time, information and knowledge were kept secret as a means to secure standing.

Rama was self-taught in the art of healing, mostly by Spirit Intuition and a natural talent for discernment of the unseen and unknown.

At this time an outbreak of the Black Plague was devastating the race of the Hermans(Celtics). It was believed by the public and promoted by the Druids as a punishment sent by the gods for improper behavior and irreverence to the gods.

Rama did not believe this and had a talent for making remedies from herbs and other plants. One day while walking in the forest, he fell asleep under a tree and had a dream of a spirit called Asclepius come to him and tell Rama how to prepare a concoction with mistletoe and a gold pruning knife. Rama awoke and prepared this mixture and began to give it to his patients, who began to recover. As a result the people empowered Rama to take over the Schools of Knowledge of the Druids, who had instituted human sacrifices as a way of relieving the plague.

In the next decade Rama proceeded to conquer most of Northern Europe as well as parts of Asia, manly by offering new and wonderful healing remedies and leaving in place the local civilian government. Also accredited to him are the Aryan calendar and the first writings of the Zodiac signs.

The next notable Healers were a Greek family of physicians by the name of Asclepius. This was in 1200B.C. Curiously enough this is the same name of the Spirit that appeared to Rama 5300 years before! Also in common was the symbol used by both, which survives today, the Caduceus, the symbol of the medical staff of the US army. The healing clan of Asclepius spanned some 200 years of the Greek civilization and was woven into their mythology, traces of which are still in existence today.

Both Rama and the clan of Asclepius were what were called Priest-Physicians. These individuals were highly educated as well as very spiritual.

They made no distinction between science, philosophy, and religion. Each was supported by the other as an equally balanced expression. They tended to be religious as well as political leaders, shaping the world they lived in, and those about them.

No history of healing can be complete without some mention of Hippocrates. Many versions abound and many interpretations also flourish. Some say he separated magic and superstition from medicine. In this there is much truth, but to say he separated prayer and spirit healing from this is to be mistaken. Only in the last hundred years have we managed to uncover new facts not known in 3-4,000 BC. What was given to us by Hippocrates was manly the knowledge of physical science as something not magical or mysterious. He taught common sense and observation to be key elements many times for healing. His bedside techniques are still mimicked today by or own Allopathic Doctors. True service to the sick and dying became a staple and guiding force his practice also. Many say that the Hippocratic oath is derived from his original oath of practice towards his patients. Others say not, but upon close inspection, the two are extremely similar. Certainly many of the techniques of diagnosis came from this humble man who lived to a ripe age of 90 and the world was made a better place for his existence. This era was around 460-500 BC.

The next noted Healer is the first one to exhibit healing exclusively by the power of God, without herbs or ceremony or being based on a belief system. This person is Jesus Christ. Jesus healed at a distance, by contact, and by a persons’ belief, or self-healing. No ceremony was necessary or any outer apparatus or assistance. Jesus Christ is the first recorded case of an individual exclusively performing Spiritual Healing.

Galen was the next physician of note. He was the last of the noted physicians of the Roman period. His techniques built upon Hippocrates’. While lacking the dignity and the understanding of his predecessor showed humanity, his methods dominated the field until the 17th Century AD.

It can easily be seen now how through efforts of healers, not warriors or politicians some of the greatest strides of salvation for humanity have been accomplished. Many of these early healers were persecuted and put to death. Between 1300-1350 AD, more women were put to death for practicing healing than all who died in the German prison-of-war camps in WWII. This was brought about by an edict that unless you had graduated from the College of Surgeons, you were not allowed to practice medicine under pain of death. Only men were allowed to enter the College.

This brings us to modern-day from the pagan era of healing. Many countless others no doubt contributed to the progress, too numerous to name.

Anyone desiring to enter into this study has a wonderful tradition and work behind and before them.

If you are looking to learn more about Spiritual healing and are in need of Healing Cassadaga Spiritualist Camp is offering a Zoom Spiritual Healing Session with Reverend Steve Adkins from February 19th through April 9th, 2022.  Make sure to check out the links and join the class to learn more.